by Ev Schwartz on October 24

“A Shift In Camp Ownership”

We wanted to share some news with you regarding a shift in camp ownership. At the conclusion of 2022, Mondamin will continue to be owned by Andrew, while ownership of Green Cove will be passed to Calla.

Both Andrew and Calla are third generation Bell family and will carry on the traditions of the camps that were started by their grandparents, Frank Sr and Calla Bell. Nancy Bell Sr, Nancy Bell Jr, and Frank Jr are still around and involved.

In the year 2022, it has become appropriate that both camps have full autonomy and are owned by their respective Directors. In the past a majority ownership of one director (as it was with Frank and Chief previously) has led to feelings of inequality. There are other more practical issues like the reality of operating on separate campuses during the summer, as well inherent differences in the running of girls’ vs boys’ programs. It is time for a model of equal brother – sister camps in the eyes of our girls and boys!

Very little else will be changing! Programming will remain the same, and the two camps will continue to work together as brother-sister camps, in sync and in tandem. Co-eds, session dates, sharing of facilities, etc.- the campers and staff will find their routine unchanged.

We look forward to many years ahead of continuing to provide the same summer camp experience that you, your parents, and your children have had at Mondamin and Green Cove.

Thank you for your continued support and trust in sending your campers to camp!

Our Assistant Director is Ev Schwartz, who moved to North Carolina and joined our full time staff in 2019. Originally from Alexandria, VA, Ev grew up going to camp in the mountains of Virginia. She graduated from Virginia Tech in 2016 with a BA in Political Science and a BA in Economics. After graduation, Ev was pursuing a Masters degree in Political Science when her love of outdoor education was rekindled. From there she worked for camps as a Head counselor, Head of outdoor living skills, and an outdoor learning center instructor. Ev is an avid believer in the potential of outdoor education to bring about positive camper outcomes, as well as the power of a small community of dedicated women to make a real difference in the world. In the summer she coordinates with activities to make sure programs run smoothly and trips are rewarding and safe. In Fall, winter, and spring, Ev travels to recruit campers and works hard to assemble the best staff team possible. Ev lives at camp with her dog Eddy and spends her free time hiking, climbing, caving, and doing just about anything to be outside! 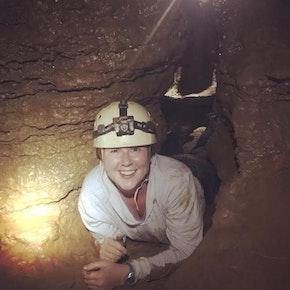